I’m a Windows user. I do dabble with a little Ubuntu now and then but most of the time since I am running around a lot: uni, work, flat, parent’s home, gf… I tend to stick to one platform. So I said to myself, I can’t work with Haskell the way I am, writing code in Notepad++ and compiling manually in command prompt. (Well I can but I wanted to make things easier). My next logical question was: Is there possibly no IDE for my most fav language? Of course there is… so I look things up and find out that the two most popular beta IDEs are Leksah and EclipseFP2. Both Leksah and Eclipse work on windows as well! Perfect. Anyone would do!

Leksah
Since, I have worked with gtk and I liked it I went to Leksah first (ahem… there is also the new installer which kinda made the choice in the end for me). I installed it but I couldn’t figure out why it wouldn’t parse my installation’s modules. (I am using the Haskell Platform with ghc 6.10.3 for the pure reason that I want to work with gtk2hs and it currently supports that version.) At first it was due to my system’s lack of the tar application which I tried to fix using GNU Tar. Unfortunately the latter seems to be missing some fork mode so it didn’t work out. Is there any way to remedy this somehow or are there any step by step installations somewhere on how to install Leksah (I have followed the given instructions to no avail)?
Disclaimer: I can’t neglect the fact that I might have not managed to make it work due to lack of knowledge from my part.

EclipseFP2
After some hours I said… well lets try EclipseFP2. Now I know it was/still is in development but I said, lets give it a shot. Unfortunately I met with problems again:
1. I couldn’t get GHC to work with it even thought I set the Haskell implementation and the scion correctly.
2. I couldn’t make it show what errors my code contained as my console was blank all the time. When I opened the Errors view i found out that my error was due to a problem with:
Could not write file: D:\Eclipse Workspace\.metadata\.plugins\org.eclipse.debug.core\.launches\L\My Project\src. The folders were there up to .launches, the rest was non-existant.

So, I am sorry to say that neither of them worked for me. For now I am going back to Notepad++ and old command prompt. I want to make it clear that I am not saying that the developers who have worked on these IDEs should be ashamed of themselves but the direct opposite. By my attempts I am showing how I applaud their time spent on giving us an IDE. I just wish I was good enough to make the IDEs work myself but sadly I was not able to. I just hope that someday Haskell will have its own IDE or that someday soon I might get time to work on one of the projects myself. I sincerely believe that given the publicity given to Haskell by the various publications and books such as Real World Haskell, the only real thing missing from making this language more mainstream is an IDE. And unfortunately not just on Linux-based systems but also on Windows. We all have to admit that most mainstream people come from Windows: especially first year uni students attending their functional programming course (that’s how I met Haskell) and Java/.Net professional programmers who want to dabble in functional programming.

Anyways, three things:
1. If anyone managed to make Leksah or EclipseFP2 work well on their machines please let me know where I went wrong in the comments. I can’t stop stressing the fact that it could be something I missed.
2. What do you guys think is the future of Haskell’s IDE development?
3. What is the most common platform and compilation method most Haskellers use?
Let me know! 🙂

1. Just minutes after my post I got a reply from Hamish Mackenzie link with tips on how to fix my problem. I am currently working on it with his help! Thanks!

2. I also asked Thomas ten Cate about EclipseFP2 on his website here and he has replied here.

Thanks both of you guys. 🙂

1. Leksah works for me on Vista. Here is a screenshot as proof! 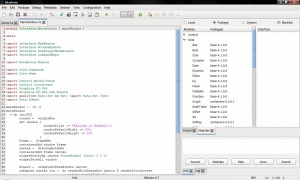 Coincidentally there is also some of 4Blocks’ code which I hope to release shortly, as soon as I have some time to figure out how to work with Cabal.

2. Going attempt to make EclipseFP2 work next. Since I need to pull the source from the live sources via github and I have never used the latter, it might take me some time. Or I can wait a bit as JP Moresmau seems to be working upon updating EclipseFP2.

To both teams: Keep up the great work. 🙂